On August 4, 2015, members of the Coalition for Regional Transportation (CRT) team participated in an engaging tour of the Northern Beltline construction site with representatives from the Alabama Department of Transportation (ALDOT).

Want to understand why Alabama has a broken transportation system? Here's an easy experiment: Go to the grocery store and buy a gallon of milk. Take it home and set it on the table. Now, just look at it. Keep watching. No matter how long you stare, the container won't get any bigger. The contents may spoil, but the size of that gallon jug will always remain the same.

This simple science project gets to the root of the crisis in Alabama's transportation funding. The buying power of a dollar goes down over time because of inflation, but the gallon is the same size it was in our grandparents' day... 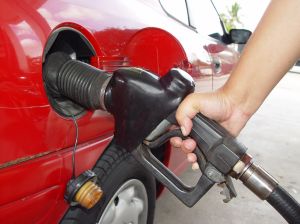 A dramatic 40 percent drop in oil prices since June has prompted new discussion about raising the long-static federal gasoline tax and has many states considering gas tax hikes as well.

At the federal level, Congress hasn’t increased the tax in more than 20 years, leaving it at 18.4 cents a gallon since 1993 — when gas cost a mere $1 a gallon. Among states, gas taxes average about 23.5 cents a gallon. Should we be paying more?

Misconceptions about the history and politics of gas taxes are clouding the debate...

The first phase will run between Hwy. 75 and Hwy. 79 in northeast Jefferson County. Heavy equipment including bulldozers, trackhoes and heavy dump trucks are moving dirt and grading an area near where the interchange will be.

Kennedy’s remarks were made during the “People’s Climate March” in New York City, which the Associated Press estimates included over 100,000 protestors calling for government action on climate change.

But while Alabamians might be quick to dismiss the Climate March and Kennedy’s comments as having taken place in the far-off liberal bastion of the great northeast, there is actually a direct Alabama connection to the whole ordeal.