The first phase of construction is in progress on the Northern Beltline highway project, running between Hwy. 75 and Hwy. 79 in northeast Jefferson County.

Heavy equipment including bulldozers, trackhoes and heavy dump trucks are moving dirt and grading an area near where the interchange will be. Construction of a temporary bridge over Self Creek in progressing and will soon allow heavy equipment to move over the creek more easily.

Read the FULL STORY at AL.COM. 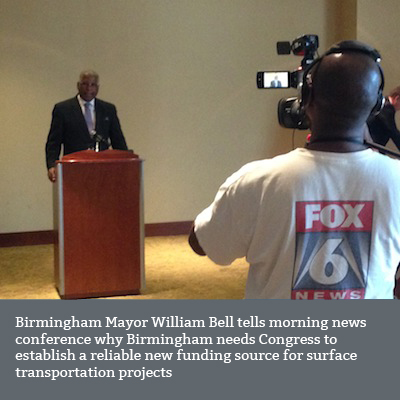 The national transportation research group TRIP announced today that a recent study conducted by the group reveals Alabama loses $3.1 Billion each year due to deficient roadways within the state’s borders. TRIP director Will Wilkins joined local elected officials and CRT Chairman Mike Thompson for a morning news conference, in which the details of the study were shared with members of the working press.

Here is the complete text of the release, which shows nearly $1,600 is lost per Birmingham area motorist each year:

As construction on the Northern Beltline progresses, the first temporary bridge is going up over Self Creek.

The first temporary bridge over Self Creek is being built. A series of silt fences and other devices is keeping Self Creek clear. I saw dozens of fish swimming in the creek during my visit with Linda Crockett of ALDOT.

The completion of a beltline around Birmingham is long overdue. Without a northern loop, the region’s growth spread unevenly to the southeast – creating congestion in the communities along US highways 31 and 280. The Northern Beltline will alleviate that southeastward expansion and provide more opportunity for affordable housing closer to the region’s urban core.

Read the FULL STORY at SweetHomePolitics.com.

The construction of the Northern Beltline is well on its way, with the first phase running between Hwy. 75 and Hwy. 79 in northeast Jefferson County.

Heavy equipment including bulldozers, trackhoes and heavy dump trucks are moving dirt and grading an area near where the interchange will be. Two construction entrances to Hwy 75 have been added so equipment can enter the site.

Read the FULL STORY and SEE PICTURES at AL.COM