Posted by Coalition for Regional Transportation 5sc on June 15, 2016

Throughout the summer, members of the Coalition for Regional Transportation (CRT) team will be spending time with several of the 47 local government stakeholders who signed resolutions of support for the Northern Beltline. By speaking with these forward-looking individuals, we hope to better understand why they offered their support for the 52.5-mile interstate.

The first person that we got an opportunity to speak with was Delor Baumann, Mayor of Hueytown. Mayor Baumann has been serving Hueytown since 2004 and has a deep passion for the future of the community. 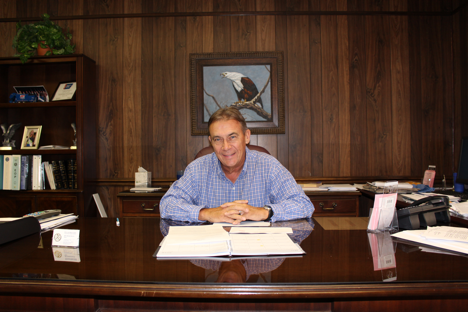 "I was involved in a family business in Bessemer for over 40 years, and I know that infrastructure is critical to creating jobs," Mayor Baumann explained.

Hueytown became a city in 1960, and currently has a population of 16,100 people. As many people know, the community has a long-running history with sports legends. Hueytown natives include Tampa Bay Buccaneers quarterback Jameis Winston, as well as NASCAR racers Donnie Allison, Bobby Allison, Davey Allison, Neil Bonnett and Red Farmer — also known as the "Alabama Gang." According to Mayor Baumann, "Several years ago, you would find NASCAR racers eating at local restaurants throughout Hueytown."

When driving through Hueytown, one quickly notices the impressive high school that was constructed in 2011. It is a point of pride for the community, and Mayor Baumann is quick to highlight the value of the facility. "We had to find a lot of land for the school, because it is so large. Thankfully, we did, and was also constructed for a very reasonable amount of money. This school is incredibly important to the community." Currently, the city is also getting ready to construct an impressive new city hall facility, as well as a new jail.

As Hueytown grows, the value of high quality infrastructure is undeniable. Currently, three major roads run through Hueytown, but the city lacks direct access to a major interstate. According to Mayor Baumann, if the Northern Beltline is constructed "we will see growth." Further, Mayor Baumann notes that, "Communities along the Northern Beltline can share in the prosperity together. Businesses like to be grouped together, and we will see that along the interstate exits. With these additional exits, we'll be able to attract new businesses."

When asked why he expressed support for a project with a significant construction timeline, Mayor Baumann replied with a very straightforward answer — "Patience is a virtue." He continued by saying, "This is an incredibly competitive world, and we need to find a competitive edge. Infrastructure helps us get there. This is all about improving quality of life."

Moving forward, Mayor Baumann plans to continue practicing patience while anticipating the long-term benefits of the Northern Beltline. According to Mayor Baumann, supporting the project is "common sense."

We appreciate Mayor Baumann taking the time to speak with us and look forward to hearing from additional government stakeholders who also submitted resolutions of support for the Northern Beltline.